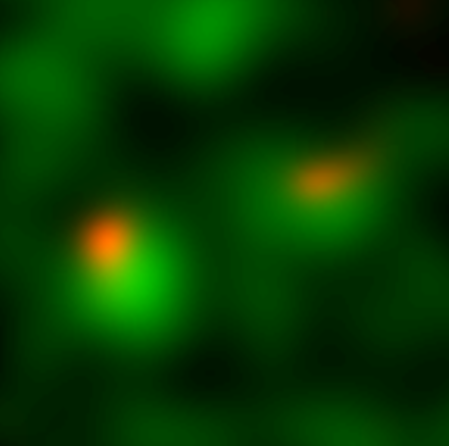 I have now performed the experiment to test the interaction of parMRC in the context of parC integrated in the genome.

The parC was integrated in a genomic locus adjacent to an endogenous repeat that could be easily visualized by targetting at dCas9-fluorescent protein tag.

by waiting for G2 we could see that each locus became a double, and we would have two proximal copies of the parC integration that could in theory be separated by the parM filament (when parR adaptor was present):

We did not observe this however. No strong filaments could be seen between the doublets.

Yet, signal was co-localized at this locus between the parM and parC (dCas9 tagged array).  See deconvolution montage of z slices:

This hints at interation at the molecular level between the components of the system.

We may have been wrong in assuming that the presence of large filaments before meant that these kind of structures are biologically relevant or indeed what will work for our purpose. In fact we know from previous studies that overexpression of parM causes giant lattice-like stacking of filaments in a non-functional organization:

The interesting enhancer-promoter biology occurs at spatial distances well below 500nm. The colocalization of signal is occurring  at this size scale too, hinting that the system may still work as we invisioned.

We will now move to validating these molecular interactions using ChIP-Seq. If by such methods we can prove full parMRC complex formation at the parC locus we will then use 4C to test chromatin-chromatin interaction depletion in the presence of parMRC as a measure of a FUNCTIONAL system.